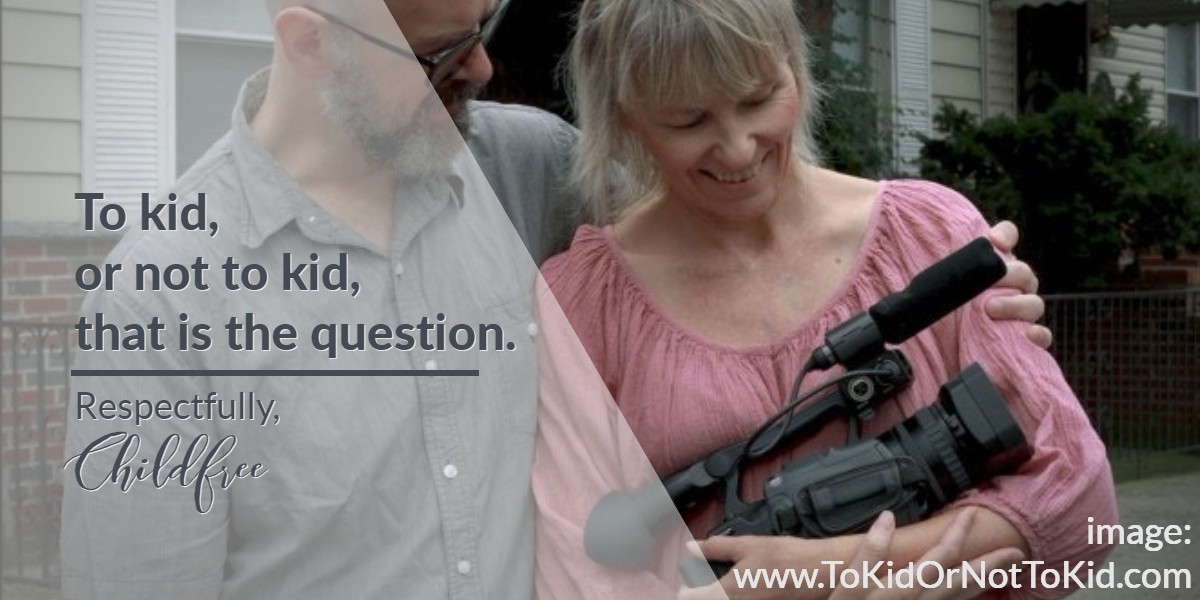 My heart was pounding, goosebumps covered my arms, and a feeling of outrage I’d never experienced before welled up inside of me.

NotMoms In A World Of Moms

I was in the midst of my decision-making process of whether or not I wanted to be a mom. My mind and heart weren’t settled on a decision. Fearing pushback and judgement for even considering a childfree life, I had kept pretty quiet about the subject.

And then I found myself in Cleveland, Ohio, sitting in the back of a conference room full of women – none of whom were mothers. Some by choice and others by circumstance. Some confident in and celebrating their parental status. Others questioning their options. And still more grieving a desire to bear children that would never come to fruition. But all gathered together for the community and connection we longed for – as NotMoms in a world of Moms.

To Kid Or Not To Kid

We were watching a test screening of Maxine Trump’s documentary film titled, To Kid Or Not To Kid, at the 2017 NotMom Summit. I didn’t know what to expect, but was immediately drawn in by the film’s surprisingly light-hearted humor amidst the raw honesty of angst some women (and men) face when making one of life’s biggest decisions: to kid or not to kid.

Maxine had struggled to find the right time, the right words, the right confidant in which to express her fears and doubts about motherhood. She says, “When something affects me, it’s natural for me to turn on my camera.” And that’s exactly what the award-winning filmmaker did. She turned the camera on … on herself and on her husband, Josh Granger (co-producer/editor).

Maxine’s documentary showcases her decision-making process, including in-depth conversations about the taboo subject: choosing “not to kid.”

One of these conversations was with a married, 25-year old woman named Megan. Megan is sure (and says she’s been certain since age 7) she does not want children and is pursuing an elective sterilization surgery. Megan has experienced miserable side effects from the methods of birth control she’s tried and wants a permanent solution. She tells Maxine, “I said to [the doctors], in no uncertain terms ‘cause I don’t like to mix words. I was like: I would rather die on the operating table than have a baby.” 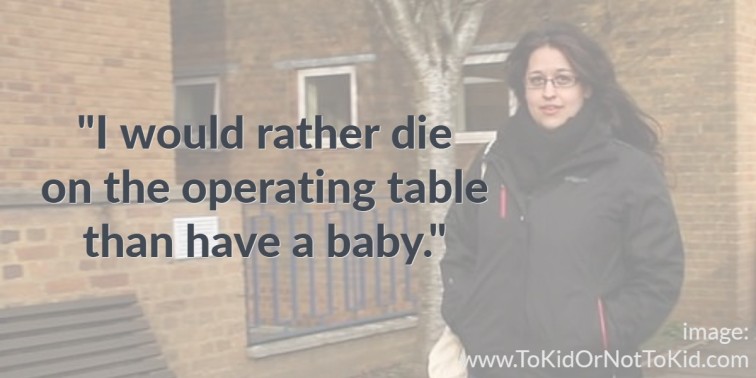 After a long and tedious process, Megan is finally approved for the surgery – with one caveat …

“The doctor gave me a ‘yes’ on the basis that I lose weight. Now, I would have been fine with that if it were for the operation, but it’s not. He wants me to lose the weight so that I’d be thin enough to do IVF if I changed my mind.”

It was difficult to wrap my head around this pre-qualifying requirement set by the physician. His caveat is ludicrous! Imagine the equivalent: a pregnant woman telling us, “The doctor agreed to deliver my baby on the basis that I choose an adoptive family for my child so that I’d just need to sign the paperwork if I changed my mind.”

Megan’s story is what caused my heart-pounding, goosebumps evoking, feeling of outrage …

I knew in that moment I was meant to help educate people about the childfree choice/lifestyle. When I returned home, it would be full speed ahead with the (then newly established) Respectfully Childfree blog and social media. I wanted to be, I needed to be, a voice of truth on this subject.

Maxine’s time with Megan left her wondering, “What’s it like to be so sure?!”

In the end, her question would be answered.

I had the opportunity to meet Maxine after previewing her film. And she’s as much of a delight in-person as she is on the big-screen! I knew going forward I would fully support her work in the childfree community.

Which is why my husband, Travis, and I traveled to New York City just over a year later to attend the public world premiere of To Kid Or Not To Kid, The Movie at the DOC NYC Film Festival. It was a joyful reunion of ladies I’d met at the NotMom Summit including my friend Renee and childfree authors, Laura Carroll and Marcia Drut-Davis, both featured in the film.

After a pre-premiere brunch, we headed to the IFC Center where we watched the film in a sold-out theater. Maxine’s hope was for “people to walk away having laughed and cried and enjoyed the film and also thought about a subject that they may never have thought about before.”

The final version of this documentary film did not disappoint!

Maxine was on life’s “ideal” path: start a career, get married, buy a home … it was time for her to have a baby. But she had hidden doubts about this next step of her journey. Doubts not even yet revealed to her husband. She was unsure about taking on motherhood but felt silenced by the stigma surrounding those who choose a childfree life.

“Do I want to be a mom?” On the surface, that seems like a straightforward question. But social expectations (in America and around the world) that women should be mothers and should want to be mothers causes anxious indecision for many.

Women are on the receiving end of judgmental messages regarding motherhood from media, religious organizations, friends, family members, even strangers. Messages like:

Childfree author, Laura Carroll, appears in To Kid Or Not To Kid stating that women are “made to feel that it’s our duty to procreate.” She believes these messages stem from pronatalism. In her book, The Baby Matrix, Laura defines pronatalism as “the idea that parenthood and raising children should be the central focus of every person’s adult life. [It] is a strong social force that includes a collection of beliefs so embedded that they have come to be seen as true.” In a nutshell, a pronatalistic view values reproduction and idealizes parenthood.

Those who choose not to kid, to live a childfree life rather than to parent, are often viewed in a negative light. Sometimes by those closest to them.

Even Maxine’s mother is reluctant to talk to her about the possibility of Maxine not raising children. In their heartfelt, on-camera interaction her mother tells her, “When you think of some of your reasons for not having children you could say, some people might say, that’s selfish. Honestly, I like the idea of you having children … that upsets me a bit to think of you like sort of on your own.”

The Wait Is Over

Marcia Drut-Davis is no stranger to ill-conceived perceptions of the childfree-by-choice. The documentary film included footage of her tv appearance on 60 Minutes in the seventies, where she explained her decision to opt out of motherhood. After the episode aired, Marcia lost her job as a teacher and received hateful mail, including death threats!

Marcia has spent most of her life advocating for the childfree choice. Between her happy dances after viewing To Kid Or Not To Kid, The Movie in NYC, she said, “For 44 years I waited for a documentary movie, anything that shows the importance of the childfree lifestyle and not to condemn it or to think of it as being bad or selfish. It’s a necessary and important documentary.” 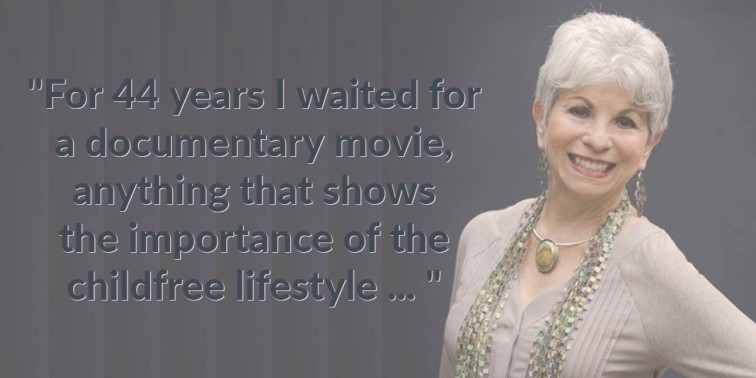 While both women and men face the parenting decision, To Kid Or Not To Kid, The Movie, focuses on women – of varying ages, races, and cultural backgrounds. They range from adamantly childfree, to regretful mother, to content mother of five. The movie is designed to start conversations about parenting as a choice and to help break the myth that if you don’t have kids, you’re weird, selfish, or somehow wrong. (1)

The truth is: we’re not all cut out for parenthood.

“So many women still feel so much pressure to have kids. Having conversations about this can help women to make their own reproductive choices without the weight of so many ‘oughts.’”

I believe wholeheartedly that taking time to think on the decision to parent is worthwhile. Women and men who consider their decision to kid or not to kid are trailblazers. They give themselves the gift of raised consciousness that will help them thrive and positively impact those around them, whether they decide to take on the role of parent or not. (2)

By the end of filming Maxine could confidently say “After all these years, I feel like there’s nothing wrong with me if I decide not to have kids. It’s a freedom I’ve never felt before.”

Maxine finds freedom in her truth. She knows what is right for her; she understands what it’s like to be so sure. Maxine overcomes her fears and learns to embrace her decision to forego motherhood. She has chosen not to kid.

“I’m owning it. I’m not having kids. I’m lucky that I can finally own my decision. How many people out there can’t? I now have to show everyone that embracing this choice is normal, and fine, and not weird.”

Maxine emphasized that the film is ultimately about acceptance. To choose to kid (parenthood) is fine. To choose to not kid (childfree) is fine. She insists, “There’s no judgement – that’s what really the essence of this film is all about. Whatever you decide to do is absolutely fine.” 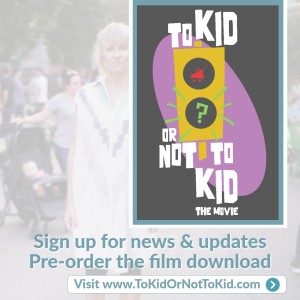 (2) paraphrased from Motherhood: Is It For Me? 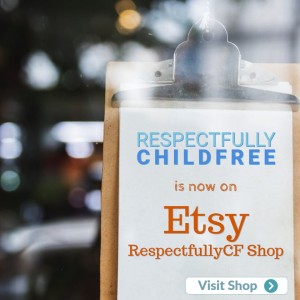